The Rapture of Dance

"I always wanted to dance, from my youngest years. I could think of no other future, could not see myself in any other role than that of a dancer on a big stage in front of a crowded audience. I wanted to perform for them the perfect beauty of movement, to wait with baited breath and a convulsing heart for their applause. Thus I built castles in the air out of my hopes and dreams...

I could no longer keep my aspirations in check, and begged to be allowed to learn to dance." 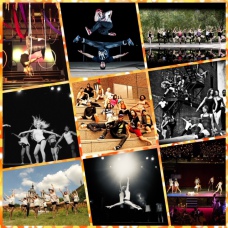 This story begins in the late 1990’s with four friends - one tapper, one hip-hop artist, one jazz enthusiast, and one lyrical ballerina- who shared a love of dance. They were young teachers, invested in their students, but who still yearned to do more, be more. They began meeting night after night in the basement of a small, old community center. There, they taught one another, pushed each other to learn, to grown, to dance… bigger and better than the night before.

Then one evening it happened. This tired, hungry group found themselves sitting on a cold floor below a set of old wooden ballet bars, eating pizza and conversing… it was a long night…and the beginning of what was to come. This community was in need of that ‘something’- the missing element of what dance could be. Together, they aspired to create artistic pieces, performances, and productions that would bring to life the visions of themselves and others in ways never done before- without limits, without definition. DANCE was an art form, after all, and if driven by the unique talent of body (SOLE) and the passion of the spirit (SOUL), it held infinite possibilities. They wanted change, a CONVERSION of the conventional ways we looked at dance…and there, that evening, the conceptual dream of Sole to Soul Dance Conversion was born. In May 2001, the company incorporated and the dream took its first steps into reality.

That year, Sole to Soul went through dramatic growth and change. Buzz of this exciting new company grew as did membership and performance opportunities. The community seemed to embrace all the company had to offer and Sole to Soul began to build a name for itself as choreographers and directors of various events. As expansion occurred the founders of the company found themselves experiencing changes not only in their professional lives, but in their personal lives as well. With careful consideration, ownership of the company underwent a major reconstruction, resulting in co-ownership by only two- Kelly Schmidt and Terrance Kuehn. They were up for the challenge, honored, and thrilled!

For over a decade, this dynamic duo led the way teaching, performing, choreographing, directing, and producing some of the most incredible pieces and projects of this millennium! Sole to Soul has been involved in extraordinary events such as the Ivey Awards, Taste of Grand, MN Opera, MN Orchestra, various Pride and GLBT, Diva MN, Minneapolis Institute of the Arts, Red Carpet Soiree, Urban Arts, LEAD Project, Walker Art Center, Juvenile Diabetes Research Foundation, and work with national recording artist Amber and the Capone All-Stars to name a few. They have shared their talent at many studios, fitness facilities, dance and cheer lines, performance teams, competitions, pageants, workshops, and beyond.

Sole to Soul has proudly choreographed, directed, and performed in Joseph’s Annual Fashion Awards (JAFA) and the Rocco Altobelli Fashion Awards (RAFA) for over ten years working with hundreds of stylists, models, and dancers. They have also have participated in various other fashion and awards shows including the Midwest Beauty Show in Minneapolis, MN, the Alternative Show in Chicago, IL, and for Intercoiffure Mondial at the Waldorf Astoria in New York, NY, and on repeat occasions in Paris, France. The company has also worked closely with Matrix and Redken as choreographers, models, and dancers for shows in Minneapolis, Las Vegas, and Washington D.C.

In July 2013, after 12 years of sharing his creativity, talent and love of dance, Terrance resigned from his role as co-owner and Executive Producer of Sole to Soul. Like Terrance, many company members have come and gone… and come… and gone within this special dance family. Each one has left their mark in the history and the heart of the company.  The company continues to prosper, in no small part due to the invaluable contributions that each has made to the foundation and creation of Sole to Soul Dance Conversion.

As the Executive Director and owner of Sole to Soul, Kelly always looks forward to the next chapter with promise and excitement! Sole to Soul continues on as pioneers in artistic creation, production, direction, and performance. Just like much of their work, it is a vision brought to life. Sole to Sole remains a company which cherishes every client, member, and opportunity and has been called one of today's most unique and exciting companies to work for and work with!